After a day of happy Rails hacking I now have my first screenshot: 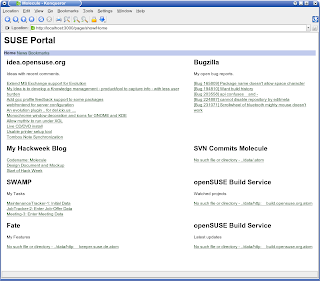 It already looks vaguely similar to the initial mockup. Under the hood there is a set of small Ruby modules which collect data from various sources and provide them as Atom feeds to the GUI. The GUI is a small Rails app which shows the feeds. The structure of the page on the screen is defined by an OPML file. The code still lacks in terms of nearly everything, but at least it's a first working slice through the application.
Posted by Cornelius Schumacher at 3:03 PM