I've now implemented caching of API requests in Studiosus, the graphical SUSE Studio client. This is essential for making the application responsive, as with cached data is can operate on native local data instead of waiting for the round-trip from the server. It's a pretty simple caching implementation based on the URLs of the requests. I would love to hear feedback about better existing caching solutions which would solve this as well or better.

So now that the client appears fast, I also improved the appliances list a bit. Garrett suggested to show the builds on the home view, so I implemented that. This gives more direct access to the builds, which are the essential object you want to work on in the client, so I think it makes a lot of sense to do it this way. 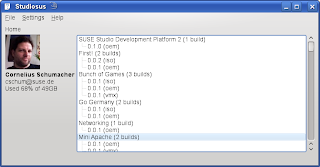 I've also worked on the Studio API itself a bit. It was lacking some API calls to handle testdrives, which I need for providing some local access to testdrives in the client. So I did a bit of Rails hacking and implemented these calls. They aren't deployed on the production system yet, though.
Posted by Cornelius Schumacher at 3:24 PM